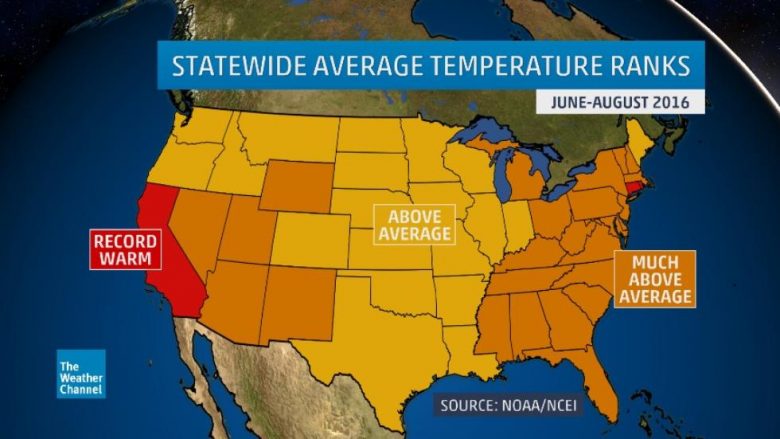 For personnel working inside a warehouse or distribution center (DC), conditions during hot weather can get unbearable.  This especially holds true for those facilities that aren’t climate controlled and lack adequate ventilation or air movement.

The last thing you want to experience is finding out that one of your employees was rushed to the hospital due to heat stroke.  That’s where HVLS (high volume low speed) industrial fans can really help.

By all accounts, the summer of 2016 was one of the hottest on record in the lower 48 U.S. states.  In fact, according to data released by the National Oceanic and Atmospheric Administration (NOAA), last year’s summer was one of the five hottest summers dating to the late 19th century.

In addition, data also showed that eight states in the Northeast experienced their hottest August on record.  This summer, especially in the Western U.S., has been blazing away with record setting temperatures of its own.

For example, summer was just starting out when on June 20, the Las Vegas, Nev. airport set a record high 117 degrees F.  Needles, Calif. achieved a record-setting temperature of 125 degrees F as well on June 20 and one day later, Ocotillo Wells, Calif. hit 124 degrees F, the hottest temperature ever measured in San Diego County.

To help increase awareness about such workplace dangers during the past few decades, the National Institute for Occupational Safety and Health (NIOSH) has evaluated a variety of scientific data on heat stress and hot working environments.  NIOSH first published its detailed findings in 1986 in its well-known report, Criteria for a Recommended Standard: Occupational Exposure to Hot Environments, most recently updated in February 2016.

In the report, NIOSH states that although workers can acclimatize themselves to different levels of heat, each worker has an upper limit for heat stress beyond which that worker can become a heat casualty. Further, it has been shown that a worker’s ability to focus attention and the worker’s reaction times can be dramatically reduced by even a two percent dehydration level due to heat stress.

It’s no surprise then, with California recording such record high temperatures, that state government officials there are stepping in to further regulate working conditions, especially those related to heat levels in indoor working environments.  Outdoor workplaces in the state have been tightly regulated since 2006, and now the focus is turning inside, such as warehouses and factories.

California Labor Code Section 6720 went into effect the first of this year.  The law directs the state to draft and propose heat illness and injury prevention standards for indoor worksites by January 1, 2019.

Currently, most California employers are required to establish and implement an effective Injury and Illness Prevention Program (IIPP).  But additional regulations are on the way.  This legislative activity is due in part to an incident earlier this year when a California DC worker was hospitalized with heat stroke.

As a result, the California Occupational Safety and Health Appeals Board upheld citations against the DC operator.  The Appeals Board then ruled that the employer’s IIPPs failed to address the hazard of indoor heat.  Such actions can result not only in penalties against employers but class action lawsuits where employees attempt to recover those penalties against employers who fail to control health risks associated with excessive indoor heat.

No excuses with so many HVLS fan options available

With rules still in the development stage for indoor workers relative to heat, warehouse and DC operators will have to remain diligent concerning how those rules will play out.  Increased regulation will likely mean some legal jeopardy for DC operators there if inside temperatures are not well controlled.

Regardless if your operation is subject to increased regulation like those occurring in California or not, you owe it to yourself and to the health of your workers to keep them comfortable and productive during the workday.

With several available size diameter options available, Entrematic makes it easy for warehouse and DC operators to control air movement and lower temperatures inside their facilities with our innovative HVLS industrial fan solutions.