Is Your Dock Wind Load Ready? 2016 Hurricane Season Is Underway

So far this year, Alex, Bonnie, Colin, and most recently Danielle, have appeared on the world stage in the Atlantic and the Gulf of Mexico as named tropical cyclones. Only Alex made its way to hurricane strength way back in January as a Category 1 storm. Alex though remained far out in the Atlantic and never made landfall. The rest of the tropical cyclones had minimal effects when they did hit land. As of this posting, “Earl” is on deck.

Toward the end of May, the National Oceanic and Atmospheric Administration (NOAA) issued its prediction of a “near-normal” Atlantic hurricane season, which runs from June 1 through November 30. NOAA is projecting a 70% likelihood of a total of ten to 16 named storms.

NOAA is also predicting that four to eight of the named storms will become hurricanes. And of those, one to four will be major hurricanes (Category 3, 4 or 5), with wind speeds in excess of 111 mph.

Meteorology is not exactly the most precise of sciences. Long-range predictions often don’t pan out as expected. While NOAA is expecting a near normal hurricane season, there also remains a three in ten chance of an above normal season. And because the past three years have been witness to below normal activity, a near normal season raises cause for concern up and down the east coast and along the Gulf of Mexico.

The more dock doors, the greater risk of damage

Regardless of whether or not a tropical system makes it to hurricane level, a system that’s classified as a tropical storm (sustained surface winds of 39 mph to 74 mph) can still pack quite a punch and cause extensive damage. In addition, tropical storms are known for spawning weak to moderately strong tornadoes that can add up to even more damage to property and structures.

Loading docks, especially those on larger warehouses and distribution centers with numerous doors, can experience significant damage when high winds concentrate on a single side of the structure.

A handful of dock doors is one thing, but a distribution center or warehouse with 25 to 50 doors or more is another. One extreme high wind event—either due to a hurricane, tornado or other unexpected curve from Mother Nature—can wreak havoc on your facility’s dock doors, and subsequently the facility’s interior.

Understanding the concept of wind load

Rest easy. Properly constructed dock doors for use in such high-risk areas are available with the capability to withstand high wind loads.

High winds are potentially so destructive because they can generate enormous amounts of positive and negative pressure against the surface of any structure they run into. However, the effect of the wind pressure is also dependent upon the size and shape of the structure. Bottom line, the intensity of this pressure is known as the wind load.

Loading dock doors may represent the path of least resistance during a high wind event as horizontal winds create pressure against a structure. If the wind finds a weak spot on the side of a building, that weak spot (a dock door in this case) will succumb or give way to the wind’s pressure. If the door does not feature some kind of reinforcement, and is not constructed of materials that will withstand impacts from flying debris, extensive damage to the door is inevitable. 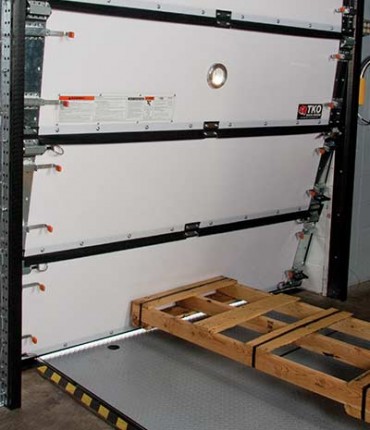 The Wind Load Package is available on the following TKO impactable dock doors which are all Miami-Dade County NOA (Notice of Acceptance) rated:

As we rapidly move toward the peak of the 2016 hurricane season, and if you happen to conduct operations in areas of the country that are susceptible to such powerful storms, make sure that your docks are prepared with wind load capable sectional doors.